The FW821 input-output module provides one 24VDC output and one feedback input switch. The input line is monitored for open line faults and ground faults, and the contact must thus be wired with an end-of-line resistor. The output line is monitored for open line, short circuit faults, ground faults, and external 24VDC power source loss. It is a UL listed device according to UL864 and ULC-S527 for Fire Protective Signaling Systems for indoor use.

When the output is activated or the feedback is switched, the device LED will indicate the event condition by fast blinking.

A return to normal condition will cause the event to disappear and the device LED indicator will return to the red idle condition.

The FW821 is an intelligent addressable module and takes one address on the Signaling Line Circuit (SLC) or Data Communication Link (DCL) of the fire alarm control panel.

1.  Mount the FW800 base onto a 2X4 or 4x4 electrical box using the screws provided, as illustrated in Figure 1. 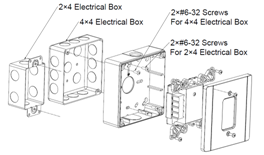 2. Connect the wires, see Figure 2. There is polarity sensitive between terminal 1 and terminal 2, between terminal 3 and 4, and between terminal 5 and 6. All circuits are power-limited. The maximum line impedance for Feedback input circuit is 25 Ω and the maximum line impedance for output circuit is 1 Ω. External input power supply is either PCU AUX output of FACP or Listed 24VDC Regulated/power-limited source with ground fault detection.). Example of compatible device: door strike, Model 0563 from RUTHERFORD CONTROLS IN’L INC., with “Fail secure” mode. Acceptability should be determined by Authorities Having Jurisdiction.

3. Wire the SLC/DCL to the module, as illustrated in Figure 3. 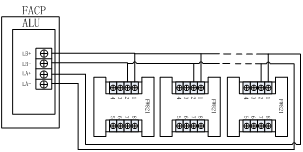 (a) Class A or DCLA Circuit

(b) Class B or DCLB Circuit

4. Combine the assembled unit to the base using the screws provided.

5. Apply power to the control unit.

1. Before testing, inform the proper authorities that the system is undergoing maintenance and will temporarily be put out of service. Disable the system to prevent unwanted alarms.

2. Make sure the indicator LED on the detector’s surface is flashing. Failure to flash indicates a non-functioning detector or a faulty wiring. Check the wiring and remount the detector.

3. Trigger the input switch to activate a feedback signal. The LED should turn to red fast blinking. Check the event occurrence displayed on LCD of the controller and verify it.

4. Restore the input switch to normal position. The LED should turn to red idle condition. An output signal will display on the FACP AMI interface.

5. Activate the output (you may need to first make a related control logic on the control panel). The LED should turn to red fast blinking.

6. Deactivate the output. The LED should turn to red idle condition.

7. Once the testing is completed, set the system back to normal operation and inform proper authorities.

Return the module for repair if it fails to flash or alarm during testing. Do not disassemble the module without permission.